What Are the REAL Qualities of Your Astrological Sign?

October 20, 2016
Disclaimer:  This is a work of humor.  I made it all up, except for the names of infamous people.  Please don’t take it seriously.  On the other hand, if you want to laugh, go ahead. 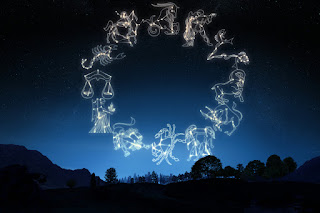 Astrologers love to make people feel good about themselves.  They sell books that way, not to mention all those syndicated newspaper columns.  Descriptions about the characteristics of each sign are bound to be glowing and flattering, with an occasional “but” or “however” thrown in, just to give the impression that the author is not trying to butter everyone up in order to create a best seller.

It came to my mind that it would be refreshing to give readers an alternate view of those starry signs in the sky.  I consulted an astrologer friend, Madame Brunnhilde K. Tollkopf, and together we came up with the following:

ARIES:  You are a big baby, domineering and bad-tempered.  Nobody loves you, except your mother, and even she has second thoughts.  Adolph Hitler was an Aries.

TAURUS:  You are stubborn and you always think you are right.  When you get angry you destroy everything around you, starting with the person who made you mad in the first place and working from there.  You are probably overweight.  You share your sign with Saddam Hussein.

GEMINI:  You never know from one minute to another what you’re going to say or do, and neither does anyone else.  Some people find this exciting.  Most people find it obnoxious.  The best that can be said about you is that Gemini produces fewer criminals than any other sign, although Jeffrey Dahmer was a Gemini.  Try to figure that one out!

CANCER:  You are moody, grumpy and too sensitive.  You probably have the first dollar you ever received.  Of all people in the world, you are the most likely to end up on the wrong side of the law.  Lizzie Borden was a Cancer.

LEO:  You have the world’s biggest ego.  You always want to be the center of attention and the boss.  If you are not the center of attention and the boss, you either sulk or get mad.  You would make a good dictator, just like Benito Mussolini.
VIRGO:  You are the poster person for OCD.  You are picky, picky, picky.  You never have a hair or a thread out of place, which annoys the hell out of everyone else and makes them wonder if you are from another planet.  Ivan the Terrible was one of you.

LIBRA:  You love to argue, and you are very good at it.  You hate loud noises and cell phones.  You are so indecisive, it is a miracle if you get anything done, and when you do get something done it is usually the wrong thing.  Lee Harvey Oswald was a Libra.

SCORPIO:  Everyone is afraid of you, including people who like you.  You are able to think of some very creative ways to be evil and vindictive.  You are so oversexed that you would attack an SUV.  If you are old enough to remember Senator Joseph McCarthy, you will be unhappy enough to know that he was one of you.

SAGITTARIUS:  You have a big mouth and you have probably, at one time, offended everyone you know.  You are lucky to be still alive.  Please call your mother, because she hasn’t heard from you in a year.  You share your sign with Francisco Franco.

CAPRICORN:  You are a social climbing nerd and a crashing bore, unless you decide to become an evil dictator, like Idi Amin.

AQUARIUS:  You are friendly, but weird.  You are so weird that even weirdos think you are weird.  You are liable to do anything.  The painted ladies in New York’s Times Square are probably all Aquarians.  Kim Jong Il is definitely one.

PISCES:  You are creative, compassionate and intuitive.  You care deeply for the poor and downtrodden.  You are artistic.  You instinctively know that there are more important things in life than money and power.  Michelangelo, Enrico Caruso and Elizabeth Taylor were Pisceans.

PISCES:  You will never have a dollar to your name because you are too busy trying to be an actor or a novelist.  You are sneaky and you daydream too much.  People think you are sweet, but you are just lazy.  If you aren’t lazy, you’re a serial killer, like John Wayne Gacy.
Was that okay?