Okay.  I already told everyone about my stage debut as Innkeeper No. 2 in the St. Joseph’s Elementary School annual Christmas pageant.  If you haven’t already read about it, you can find it here.  I won’t repeat that story again – not that it isn’t a good story, I just don’t want to go through all the trouble and I don’t want to bore you.

I didn’t tell you about the doll house, though.  That was one of those magical Christmases.  I was about 4 or 5 years old.  My parents and I were living in a one-bedroom apartment behind my maternal grandparents’ gas station, on our little town’s Main Street, which was part of a longer highway that extended to nearby towns and to the small city located about three miles away.  It was a noisy, busy highway and my parents and grandparents were always watching to make sure I didn’t venture onto it and get myself run over by some passing idiot driver motorist.  The little apartment was cramped and old.  A few years later, we would move across Main Street, into a much bigger house, but for the time being we were roughing it.

My parents didn’t have much money then.  My father was working seasonal jobs as a bricklayer.  My mother was not yet working outside the home.  Things were tight.  Of course, being a little kid, I didn’t know that.  My parents knew it because they were the ones who had to figure out how to live on peanuts.  There was never a thought, though, of not having Christmas.  Of course, we had a tree.  In my memory’s eye (which can be mistaken because, after all, I am now 70 years old and this happened back in the very early 1950s) it was a small tree.  To my young eyes, it was probably the most beautiful Christmas tree in the world.  I was easy to please.

That Christmas, I woke up, got up out of my bed in the apartment’s only bedroom and walked into the living room.  There, by the tree, was the most beautiful thing I had ever seen.  It was a doll house.  It was unwrapped, probably because it was too big to wrap with whatever Christmas paper my parents had.  There were other presents, too, but the doll house was the centerpiece.  Of course, it was just an inexpensive metal one, but to me it was a miniature palace.

I played with that doll house for years until, eventually, it became dented and worn out.  I don’t know how it met its end.  It was probably tossed out.  But that would be in the future.  On that Christmas morning, it was the best present ever.

Another thing I remember from around that time is that I was scared to death of sitting on Santa Claus’ lap.  Nobody could get me to do it.  I was a pathologically shy kid, anyway, and a big, bearded fat man in a red suit with a loud voice could send me hiding behind my Mom’s coat.  Finally, one day, someone (I think it was Mom) got me to sit on the lap of some Santa or other and tell him what I wanted for Christmas.  I did it very well, too.  I actually talked and I didn’t cry.  Word of my accomplishment got around the family and my parents’ friends, and they must have thought it was cute because some of them laughed.

Fast forward to my high school years.  By then, everyone knew I could sing and I had ambitions to become an opera singer.  One Christmas, I found myself part of a small choir rehearsing to sing at the Midnight Mass at our Catholic parish church.  The choir was being led by a man whose desire to serve far outweighed his musical ability.  He couldn’t even carry a tune, a real drawback in a choir director.  The choir consisted of two men and three females:  my younger sister, another soprano and myself.  We three females had good singing voices.  The two men, on the other hand, were at least as tone-deaf as the director.  This made for an interesting balance.  My sister was the youngest of the female participants, so the other soprano and I were the ones who ended up trying to make sure the whole thing wasn’t a disaster.

Somehow, we got through the mass, and that particular singing group disbanded for good.  Nobody was sorry about that. 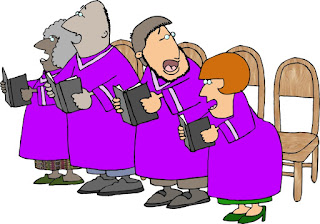