November 27, 2016
I always love the Christmas season, but this year, more than ever, I need a good old-fashioned one.  I have a terminal case of We-Are-Going-To-Have-a-Sociopath-in-the-White-House Syndrome. 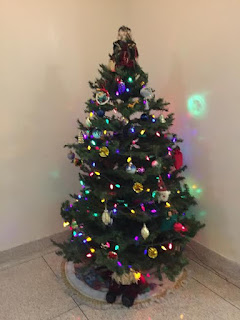 Even back in ancient times, before cable TV, smartphones and the Internet, we knew how to celebrate the Christmas season.

It always started off with the annual collection.  This was my idea.  All three of us Minicozzi kids would pool our money together to buy gifts for Dad, Mom, Grandma and Grandpa.  As the Advent season ground on, we would add whatever coins we could spare to the fund, and by a few days before Christmas we would have enough to get something nice for all four of them.

“Nice” was a relative term.  Our family was working class, and we lived in a small town, next to a small city, in the middle of the apple growing area of Washington State.  Nobody in our family expected diamonds or anything like that.  We weren’t rich, not by any kind of stretch.  Some sweet-smelling hand lotion from the dime store was a “nice” gift from three kids who had been pooling their change.

We always had the most fun on the days and weeks leading up to Christmas.  The streets in the Downtown shopping area in the small city next to our small town were decorated for the season, and the stores had their colorful displays in the windows.  Window shopping and browsing were obligatory and fun, especially if you were trying to figure out what you could get for Mom, Dad, Grandma and Grandpa with the money collected from you and your siblings.  I think that’s where I learned how to be both budget conscious and a spendthrift.  I can spend a lot of money, but I know how to get a bunch of decent stuff in return, even if some of it is stuff I don’t need.

I don’t remember when I stopped sitting on a store Santa’s lap, but I remember one of the times I did.  I was a terminally shy kid, but I was persuaded to go and sit on the lap of the big man with the big beard and tell him what I wanted for Christmas.  I must have been cute or funny, or both, because my parents laughed about it and told their friends.

Our Catholic elementary school held a Christmas Pageant every year, and the whole school took part.  Every grade had a presentation.  I made my stage debut in the First Grade, as an innkeeper.  Our grade was presenting The Nativity that year.  When the time came to cast everyone, Sister A. gave all the plum parts to other kids.  I was a homely kid, tall for my age and awkward.  In addition, I had attention deficit problems.  There was no way that I was going to get the part of the Virgin Mary, and I was not likely to be cast as an angel, either.  Joseph, the shepherds and the wise men were all boys.  The only thing left that would at least give me a line or two and a chance to shine was the part of an innkeeper.  I became Innkeeper No. 2, in a line of three.  Innkeeper No. 3 (a boy, of course) was the one who got all the lines because he got to direct Mary and Joseph to the stable.  All I got to say was that I didn’t have any room.

I learned very early in life that it’s best to get on the good side of the director if you want to be cast in a decent role.

I got a laugh when I spoke my line in the performance.  I wasn’t trying to be funny.  I was telling the two holiest people in the world that I couldn’t put them up, for Pete’s sake!  Later, my Mom told me that the audience laughed because I was cute up there.  I wasn’t trying for cute, either.  I was trying for unforgettable.  I was unforgettable, but not in the way I wanted.

I have a special memory of the school Christmas Pageant when I was in the Eighth Grade.  My singing voice had been discovered the year before, and my wonderful Seventh Grade teacher, Sr. Ernest, had passed the word on to my very dear music teacher, Sr. Dolores Mary, who had arranged for me to get singing lessons at a local music school on a partial scholarship.  In the Eighth Grade, I was asked to sing “O Holy Night” in the annual pageant.  The catch, though, was that I had to sing it in French.  I had never attempted French in my life.  Sister Ernest, who was of French extraction, taught me how to sing the words phonetically.  Poor Sister Ernest!  She tried hard, but I had a terrible time getting my American mouth around some of the French pronunciation!  I wish I could sing it for her now, because now I can do it properly.  Back then I was just a kid who couldn’t speak French who was thrilled to be asked to sing such a big solo.

For more of my humor, go here.