Songs My Father Taught Me

June 24, 2016
The education that my siblings and I received from my father was eclectic, to say the least.  We learned some dialect Italian words for a few things.  We learned that it is possible to wind spaghetti around a fork by holding it in the air and revolving it until no strand was hanging down.  We also learned how to shoot craps.

The lessons in shooting craps took place when we were on a family vacation in a beach town on the Oregon coast.  We were together every evening in the little cabin where we were staying, with no television.  This meant that we had to rely on family togetherness.  Dad took out a pair of dice and got us started shooting craps for pennies.  It was a real penny ante game.  Although the odds favor the house in games of chance, I don’t think Dad won any more than we did.  He never did have much luck with money, anyway.

My Dad was a friendly guy who would give his last dime, an arm and a leg and the shirt off his back to anyone he thought needed them, without expecting anything in return.  He was an honest man, probably because he was such a poor liar that he almost never tried it.  Like many good-hearted, honest people, Dad thought everyone else was as honest and good-hearted as he was, and was sometimes shocked and hurt when one of them failed to extend help when he needed it.  In addition, he was always looking for bargains.  His friends knew that if they had some old piece of junk they didn’t want they could always sell it to Dad.  The result was that we always had the worst cars and television sets in the neighborhood.  If it had to be pushed to start, or if the only way you could get a good picture was to have the youngest member of the family stand next to it and act as a human aerial, it probably belonged to us.

I won’t even mention the ugly shed that someone persuaded him would make a good gas station, even though the only place Dad could put it was in our back yard, next to a gravel alley, and there was already no lack of gas stations on our main road.  That thing was so ugly, the neighborhood kids wouldn’t even play in it.  I don’t know if he actually paid for it.  I hope not.

My Grandma (Dad’s mother-in-law) once won a color television set in a church raffle.  Grandma gave it back to the church so they could raffle it off again.  She was more devoted than almost everyone in the parish, including the nuns and priests.  When Dad heard about this, his reaction was typical: “Why didn’t she give it to us if she didn’t want it?”  The two of them were not each other’s favorite person, even under normal circumstances.  This pushed her even farther down the scale of Dad’s estimation.

The priests of St. Joseph’s Parish thought Grandma was “a little saint.”  Dad had other ideas, although he was good enough not to discuss them with us kids most of the time.  When the two of them were together, they were cordial to each other.  Dad even called her “Mom.”

In fact, Dad’s language was pretty clean, in spite of the fact that he grew up a poor kid on Long Island.  I don’t remember ever hearing him say the “f” word, and he kept other four-letter words to a minimum.  I don’t know how he spoke when he was among his male buddies, outside the house, but with us he kept a clean mouth, even when he was yelling at us.  This must have taken some control.

Dad had an untrained but beautiful, natural baritone voice.  He was a living example of the stereotype that all Italians can sing.  Sometimes I would be singing at the piano when he came home.  He would join me, and we would sing duets.  Old standard pop tunes were his forte, although he could croon a pretty good Neapolitan song now and then.  He would never sing alone in public, which was a shame, because he could have been a pretty good pop singer.  Maybe he could have even made some hit records.  We would have loved that.  We would have had a Dad on television, and our TV would have been a good one.  My little brother would not have had to be an accessory aerial anymore.

Unfortunately, my Dad’s escalating addiction to alcohol drove a wedge between the two of us, which lasted until I left home for good.  A lot of things were never resolved, and any real communication between the two of us was broken.  He was a good man, even though he showed that side of himself much more to his friends than his family when he was drinking.  I look at pictures of him holding me as a baby, before the damages of life took over, when he still had his dreams and his life ahead of him.  He was a good father then.  I like to remember him that way. 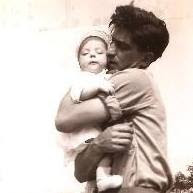 One last thing that I have learned is that I have a lot of him in me.  Like him, I have no luck with money, although I am learning, late in life, to be more careful with it and to save at least as much as I spend.  Like him, I also prefer to be friendly and helpful to people when possible and I have a tendency to trust people too much.  That means that, like him, I sometimes find myself knocked down when I wouldn’t have been knocked down if I had known better, but hey!  I have always survived and gone on.

Another thing I got from him is my tendency to dream dreams.  In my case, I have followed them, and I’m still following them.  I get that tendency to focus and pursue from Mom, who was the practical one in our family.  When one dream becomes impractical, I just find some other talent and form another one.  It hasn’t made me rich or famous or anything, but it has made my life simultaneously fun, stressful, emotional and intensely interesting, to say the least.

This world needs friendly, helpful, good-hearted, honest people who dream big dreams.  If I have any of that in me at all, I got a lot of it from Dad.  All I can give him in return is thanks for passing on the right genes.
Dad families father memoir parents