The Halls of Genetically Altered Ivy 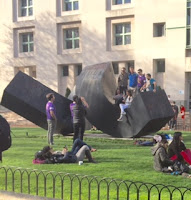 Colleges and universities are institutions of learning; at least that's what they're supposed to be.  Some of them are better at this than others, just as some students are better at learning than others.

I wonder what it would be like if extracurricular activities and campus escapades were factored into a student's final grade point average.

Let us take a sentimental journey back to June, 1968.  I will use my writer's license, and place myself in this story.  I am a 22 year old kid, about to graduate with a Bachelor of Arts in Music.  My academic advisor has called me into his office for a meeting.

(My real advisor was happy that he was finally going to get me out of his hair, and I was eager to get my degree and go on to graduate school.  Having a final meeting didn't occur to either one of us.  But I'm a writer, and I can make up anything I want to make up, even if it is a flat lie.)

By the way, all of the names in the story are fake except for mine, and any resemblance to anyone except me, living or dead, is an accident.  So don't try to figure out who I am trying to disguise, because I am not trying to disguise anyone.  Okay?

DR. GRIDAFORTE:  Well, I see you have been studying hard, at least.

ME:  Yes.  I have made the Honor Roll every quarter for the last two years.  I am going to graduate with honors.

DR. GRIDAFORTE:  Good for you.  But it looks like you have been spending so much time studying and getting good grades that you have neglected the rest of your education.

DR. GRIDAFORTE:  You never tried to pledge a sorority.  Why?

ME:  I mentioned to the leader of one of the sororities that I'd like to join, and she hyperventilated.  Every time I saw her after that she would faint.  I thought it best not to pursue the matter.

DR. GRIDAFORTE (giving me a very funny look):  You did pledge the sophomore coed service group, but I don't see any more details.

ME:  They turned me down.  I think that's because when they asked me why I wanted to join I said, "I figured you were hard up for members."

DR. GRIDAFORTE (laughing):  That’s a good one.  So okay.  You were a mentor to an incoming freshman once.  What happened to that?

ME:  I met with her once, she figured out that I wasn’t part of the cool crowd, and she wasn’t interested in being my mentee.  I figured to hell with her.  I had better things to do, anyway, like trying to get all A’s in at least one quarter.

DR. GRIDAFORTE:  Hmmm.  Okay.  I see that you would never toss your underwear out the window when the boys staged a panty raid.

ME:  I threw a pair out to them once, and they just tossed it on the grass.  That was the only pair they threw away like that.  I wasn’t going to waste more underwear on them.

DR. GRIDAFORTE:  It says here that you would never join any serpentine that came by your dorm.

ME:  I love to go to games and I love to cheer, but being shanghaied and kidnapped into a line of screaming college kids just to have a good rally … those kids were scary!  It was like being sucked into a wind tunnel with the wind set on “hurricane.”

DR. GRIDAFORTE:  Okay.  I’ll give you that one.  But I’m afraid that your failure to take advantage of more of the fun of going to college is going to bring your grade point average down from an A- average to a C.

ME:  But … but … I’ll never get into graduate school that way!

DR. GRIDAFORTE:  You should have thought of that before you decided to be a nerd.

DR. GRIDAFORTE:  Wait a minute.  I just saw something.  Did you really hang two of your professors in effigy outside their offices two days ago?

ME:  Yes.  I apologized to both of them.  Fortunately, they both got the joke and they are still laughing.

DR. GRIDAFORTE (laughing hard):  This is priceless!  You’re okay now.  You’re safe.  That caper erases all the failure of the last four years.  You can keep your GPA.

DR. GRIDAFORTE:  By the way, you are very funny.  Have you ever thought of becoming a humor writer?

For the sake of academic excellence and campus sanity, it’s a good thing that this could never happen.

Have you ever thought about opera and wondered if it could actually be entertaining?

Well, if you want some good laughs at the art of opera and the world of the people who perform it, there is my new book, Opera for People Who Don't Like It.