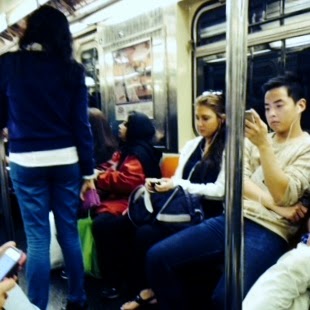 The official language of New York is English, but you’d never know it.  Spanish is everywhere, even in subway advertisements.  (I pick up a lot of Spanish from reading ads on boring subway rides.)  We also hear Cantonese, Korean, Arabic, German, Japanese, Wolof and just about any other language that is spoken anywhere by more than 10 people.  Was that Maori that I heard those two people speaking on the bus the other day?  I don’t know.  The next time I meet a Maori speaker, I’ll ask.

The “F” word gets dropped a lot here.  True, it is not unknown in other places.  The difference is that we hear it so much we’re used to it.  It’s background noise.  It is a versatile word, which can be used to express:

Sometimes people substitute other words, like “freaking” or “bleeping” for you-know-what, but everybody knows what the speaker would say if he/she were not so embarrassed.
The “S” word gets bandied about a lot, too, but it doesn’t pack quite the same punch.

Aside from four-letter words, the English language as spoken in New York City contains many expressions.

Forget about it! is a common expression, not only here but also in New Jersey.  It’s hard to tell who started it; it was probably the local Italians, since they like to say this.  It is usually pronounced as one word:  fuhgeddaboudit!  Like that other word that begins with an f, this one has more than one usage:

New Yorkers are just now getting used to calling hero sandwiches “subs,” but mostly in the local Subway shop.  They have not, and probably never will, call them “submarine sandwiches.”  The same long sandwich, when bought at a delicatessen or an Italian sandwich shop, is still a hero.  The long piece of bread which encloses these staples of the local diet is also called a hero, as in, “I’ll have a pastrami on a hero, hold the mayo.”  No, they are not talking about Superman.  They are talking about bread.

Don’t ever call a hero sandwich a “hoagie” or a “poor boy.”  People have died for less.

The Yiddish language has given us a number of words that say, in one word, what it takes other languages whole phrases to say.

That guy that nobody likes because he’s a real jerk is a putz.

A person who complains all the time about everything is a kvetch.

When you have to carry something awkward around all over the place, you are schlepping it.

A nosy, gossiping woman is a Yenta.

When something gets you so happily excited and/or nervous that you almost want to faint, you are verklempt.  In German, that same word means “inhibited.”  Knowing the Germans, I’m not surprised.

A person with a lot of nerve and either the courage or stupidity not to care about little things like consequences has chutzpah.

Spanish words are slowly making their way into the local slang, but they have not yet reached the heights of the Yiddish ones.  A man who has a lot of courage will sometimes be described as having cojones, and you might hear an exclamation such as caramba! from a non-Latino mouth once in a while.  Spanish words will need a little more time to become fully entrenched in the local lexicon.

Oh, and if you want to hear some real, traditional New York accents, you have to travel to Brooklyn, Queens or The Bronx.  Manhattanites, who consider a trip to “The Boroughs” equivalent to slumming, are more likely to sound like the rest of the country when they talk.  They would NEVER say “Toity-Toid and Toid” instead of “Thirty-Third and Third,” so don’t even THINK of trying to get one of them to do it.
expressions forget about it fuhgeddaboudit hero sandwiches language new york slang the f word