April 21, 2014
I like to think that Jesus was looking down at us and laughing.

Holy Week in a Roman Catholic church is always nerve-racking for those involved in the services, including the music people.  In the best of circumstances it's easy to forget, from year to year, exactly how each service goes.  If you have a new pastor in charge, though, and that new pastor has ideas of his own, you can end up with a train wreck.

That's what happened to us on Holy Thursday evening.

As "Leader of Song" I was the soloist during the mass.  The choir was there, too, and, as usual during times like this, I was singing with them as well as handling my own music.

That's enough background.  Let's get to the story.

The whole mass went without a hitch, including the washing of the feet.  Several men from the congregation came up to the altar, sat on folding chairs, took off their shoes and socks and had water poured over their feet.  We could only hope they had all showered that day and that their socks were clean.  During this, I sang a solo.  I know that some people were able to listen to me in spite of the more interesting things happening up on the altar, because I actually got a compliment for my rendition.  The compliment was for how softly I sang it, which might not be such a compliment after all, but that's okay.

Anyway, it came time for the end of the mass, where the choir chants the Pange Lingua and everyone processes to the smaller church downstairs.  Our organist, who is very good at staying on top of things and always knows what we have to do, told us that we would sing ONE VERSE in the back of the church, then hightail it downstairs through the main entrance, take our places in one of the front pews down in the lower church, and sing the rest of it when everyone else came down.  Nobody had told him anything different.

This is just what we started to do.  The choir members, who are better at descending church stairs than I am, went first and got well ahead of me.

I made it outside and down the front steps of the church, and was walking toward the lower church when our organist came out and told me that we had to get back upstairs because we had to process up the middle aisle of the MAIN CHURCH, not the downstairs church! 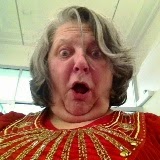 I shouted, "Come back!" and waved my hands around in an effort to get the choir to come back, but nobody heard me, especially the ones who had already gone inside.

I was still doing this when a guy from the church upstairs came down, sent me back up and said that he would get everyone else back in place.

At long last, we all got back up to where we were supposed to be and were led up the middle aisle, chanting the Latin verses, by the same gentleman who had fetched us.  He eventually led us through a SIDE DOOR to the downstairs church.  Because I have to take steps slowly, one at a time, the pastor accidentally bumped into me from behind.  My 1950s Catholic school upbringing makes me think of being bumped by a priest as a major catastrophe.  This time, though, I hardly gave it a thought.  I had more important things on my mind, such as singing the right verses and getting to my pew.

The last five minutes were fine.

And I got a story out of this!
church fun funny Holy Thursday Holy Week music singing