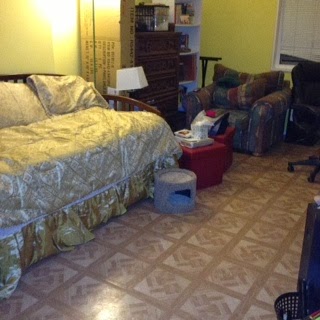 My Mom and my Grandma made valiant attempts to domesticate me when I was a kid back in the 50s and early 60s.  They were worried because I was a tomboy.  I was not above playing with dolls.  Some of my best toys were dolls.  But I also had baseball bats, tennis rackets and cap guns.  BB guns were forbidden in our house, or I probably would have acquired one of those, too.*  When we played Cowboys, I had to be either Annie Oakley or Marshall Dillon.  I was not going to be some sissy girl who sat around waiting to be rescued.  I was tall for my age, so I made a good western hero(ine) … well, passable for a kid, anyway.

I never wanted to be a boy.  Being a girl was cool.  I just wanted the option of being able to do all the things that boys did, and I wasn’t about to get stuck in a gender role.  June Cleaver was not my role model.

In other words, I was okay with learning how to cook, sew, iron clothes and clean a house like all the other girls, but I wasn’t going to let all that interfere with playing baseball in the park, and I was really pissed that nobody ever made my little brother help with the housework.  He got off scot-free, the little twerp.  All he ever had to do was mow the lawn, and he got paid for that.  The only benefit my sister and I received for washing dishes was not being yelled at.  You can’t save up for a new bicycle with that.
One thing I never learned was how to change a flat tire on a car.  My mother, who was petite and feminine, could change a tire like a veteran mechanic.  You just never know.

Okay, so, like everyone who lives long enough, I grew up and grew older and I am now in my 60s.  My childhood domestic training has come in handy all these years, just because I have never been rich enough to hire someone else to do the freakin’ work.  In self-defense, I have learned to make housework as quick and as painless as possible, with the aid of the following labor-saving devices:

(Do you see a pattern here?)

Mr. Clean Magic Erasers
Lysol or Clorox Wipes
Cleanser
A funny looking thingy on a pole that I use to clean the bathtub
A toilet brush
A plunger

I have no rugs on my floor because I hate vacuuming, even though I have a perfectly good full-sized Dust Devil vacuum cleaner sitting in a closet.  I also have a cat.  Cats and rugs do not mix well, for reasons I won’t go into here.

The catch in all this is that I have to keep buying refills for the Swiffer, Mr. Clean, Lysol and Clorox stuff.  What’s a little expense, though, if it means less time spent trying to be a freakin’ domestic goddess and failing at it because I don’t care enough to really get down and scrub.

Grandma, please stop turning in your grave.  I turned out okay.  Really, I did.

*And I would have shot my eye out.  In addition to being a tomboy, I was a klutz.
chores gender roles housework Humor Outcasts